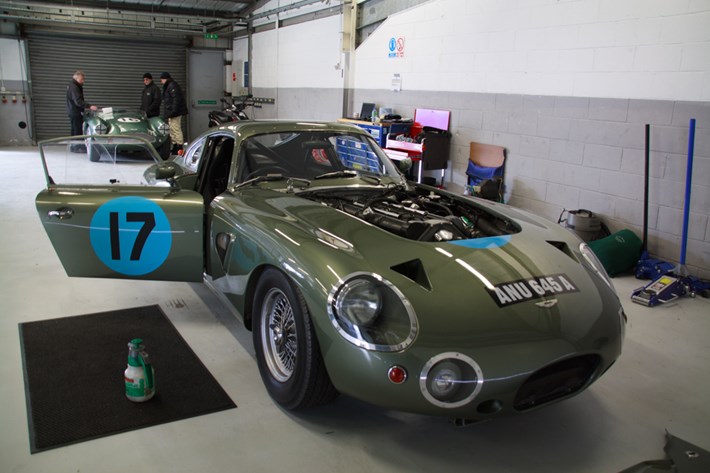 For their first race meeting of 2013, the Aston Martin Owners Club members were greeted with a bright sunny day at Silverstone. Although the weather was still cold for April, the bitter winds of recent weeks had died away.

There were only five races on the programme, but the club had managed to assemble a great variety of classic vehicles for this race meeting. As well as a round of the Aston Martin GT 4 challenge of Great Britain, and the AMOC Intermarque Championship, the club also welcomed for the first time, the Historic Racing Drivers Club Touring Greats. This series is for pre-1960 historic touring cars, and consisted of a varied grid ranging from the tiny Fiat Abarth 850 TC and Austin A35 right through to the large Ford Zodiac and the Jaguar Mark 1. Also racing was a round of the Equipe GTS series which specialises in pre 1966 period specification GT cars and included such delights as the Triumph TR4, MGA and MGB, Porsche 911 and various Austin Healey 3000s. Final race of the day was for 50s Sports Cars including the Jaguar XK Challenge.

First race was for the AMOC Intermarque Championship which saw an easy win for the Sunbeam Tiger of William and David Smallridge who had lapped the entire field by the end of the 45 minutes race. Early leader Michael Mallock driving an Aston Martin DB4 finished 2nd while Kevin Norville was 3rd driving an Aston Martin DB4. Next race was for the Equipe GTS which saw a great battle between the similar Triumph TR4s of John Andon and Pete Foster who ere separated by just over half a second after 35 minutes of racing. Peter Tognola was a distant 3rd in the only Porsche 911 in the race. The third race was for the modern Aston Martin GT4 of which there were only 10 starting the race. Olivier Bouche and Andrew Jarmin won by nearly 6 seconds after an Hour and Forty minutes of racing.

The HRDC Touring Greats had an ex-Grand Prix driver competing, Rupert Keegan sharing the driving of Bumble Bee, the MG Magnette of Julius Thurgood. They finished 9th overall and 2nd in class. The race at the front was between 3 Jaguar Mk1s being chased hard by Rae Davis in an Austin A40 lightweight. Peter Burton won in his Jaguar MkI from Les Ely who was almost 50 seconds behind. Rae  finished 3rd overall in the A40 and won his class.

Final race of the day was for 50s Sports Cars including the Jaguar  XK Challenge race. Geraint Owen won driving a Kurtis 500S, which the owner believed to be the first ever win for the Chrysler powered Kurtis. Nigel Webb was 2nd in a Jaguar XK120 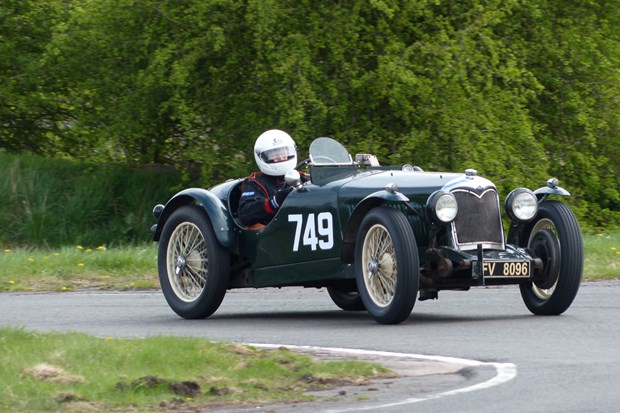