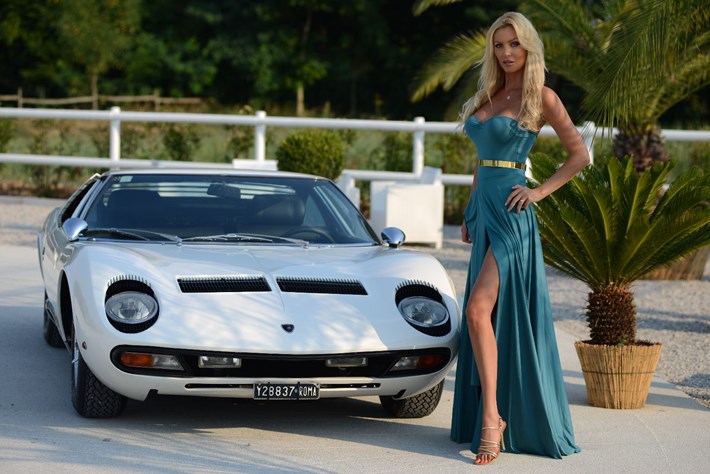 Rarely has a car been as beautiful as the Lamborghini Miura. This rolling work of art has changed the fortunes of the manufacturer and put it on the map for good.

In 1966, the Lamborghini stand at the Geneva Motor Show was very crowded. Everyone was rushing to see the new model, the Miura. This spectacular car was the work of the young designer Marcello Gandini, only 27 years old. As Bertone's head of styling, he had achieved a masterpiece with this car, whose apparent simplicity was striking at first glance. At just 1.05 metres high, the Miura was as flat as a race car and had two large windows at the front and rear. For the first time in the brand's history, it had a transverse, mid-rear engine, a technical solution that the main Italian competitors have not yet adopted. Based on the 350 GT block, the 3.9-litre V12 developed 350 bhp. Capable of reaching 280 km/h, the Lamborghini was almost supernatural compared to the competition! Outperforming all the sports cars of the time, it immediately became the darling of a wealthy clientele who did not hesitate to place an order without even having tried it. It was not until the spring of 1967 that the first cars were delivered after a few modifications, including cooling. Although the car lived up to its promise, it was disappointing because of its patchy build quality considering its price. Despite this, it sold well. In 1968, Lamborghini presented a revised version at the Turin Motor Show: the Miura S. Its engine now developed 370 bhp and it received improvements such as electric windows. Other new features were introduced during the marketing phase, such as ventilated brake discs and homokinetic (constant-velocity) transmission joints. 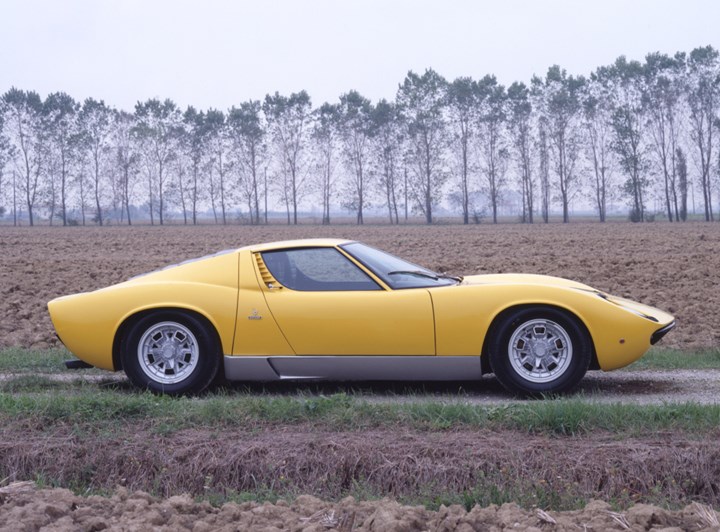 Unassisted, violent, noisy and dangerous at high speeds because of its poor weight distribution, the Miura is not for everyone. However, it was quickly adopted by many of the world's leading personalities, from Johnny Hallyday to the Shah of Iran and Miles Davis. Launched at the 1971 Geneva Motor Show, the P 400 SV replaced the S and became its most successful evolution. Power output rose to 385 bhp thanks to improved icarburettors and other modifications. The newcomer also had a new rear suspension made up of more efficient quadrilaterals and the track was widened by thirteen centimetres. Externally, it was recognisable by its sill-less eyes, enlarged grille and redesigned taillights. The Miura SV was produced until the end of 1972 when the model was discontinued. 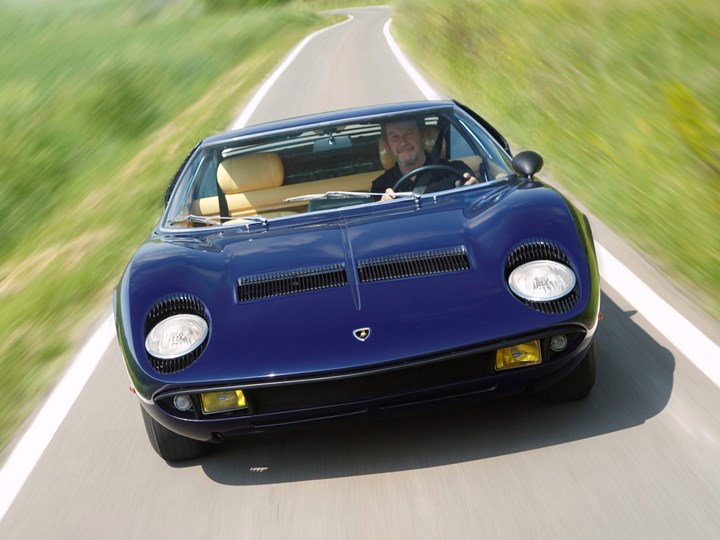 In parallel with series production, Lamborghini designed a few special cars, such as the Roadster designed by Bertone, which unfortunately never made it to series production. In 1969, Bob Wallace, the brand's test driver, designed an even more developed version of the Miura. Applying Annex J of the international sports regulations, the Jota was a laboratory of Lamborghini's know-how, with a new chassis and running gear, a body made of composite materials and wider tracks. The modified V12 now developed 440 bhp, making the car extremely competitive with a total mass of only 900 kg. Although the Jota was destroyed in an accident in 1972, some Miura SVs were converted with varying degrees of fidelity to Jota specifications by the factory. 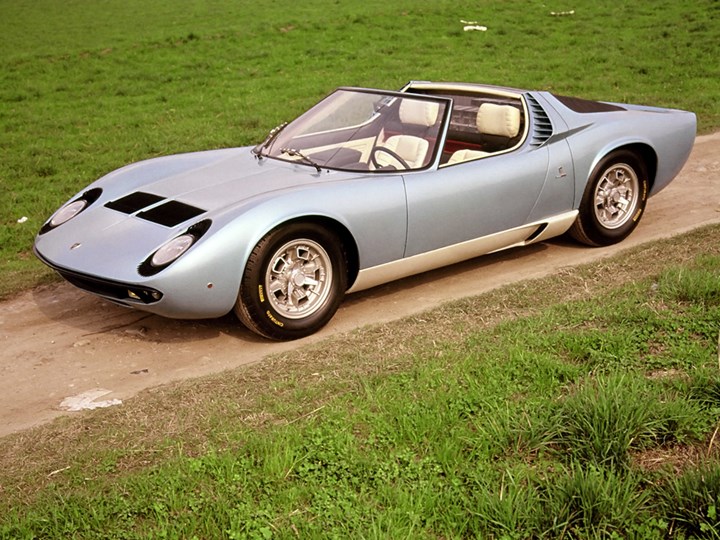 Owning a Miura requires a large bank account (at least 1.2 million euros for a car on the road), a lot of patience due to its demanding and regular maintenance, and a large budget to spend in the workshop. All parts are rare and horribly expensive, and the complexity of its mechanics requires a highly specialised workforce. The 4 Weber double-barrel carburettors, for example, need to be resynchronised regularly, which in itself is a job for a professional! Rather capricious, the beast is not made to accumulate large mileage: every 30,000 km or so, it is necessary to open the engine to ensure that it works properly. Another annoying point is that the carburettor needles tend to jam when starting, which causes a lot of fuel to flow out. If the exhaust is hot, it's a fire hazard, a disaster that has already affected a number of Miuras. But stay on top of these 'eccentricities' and the Miura is still an engaging and exciting supercar to drive. 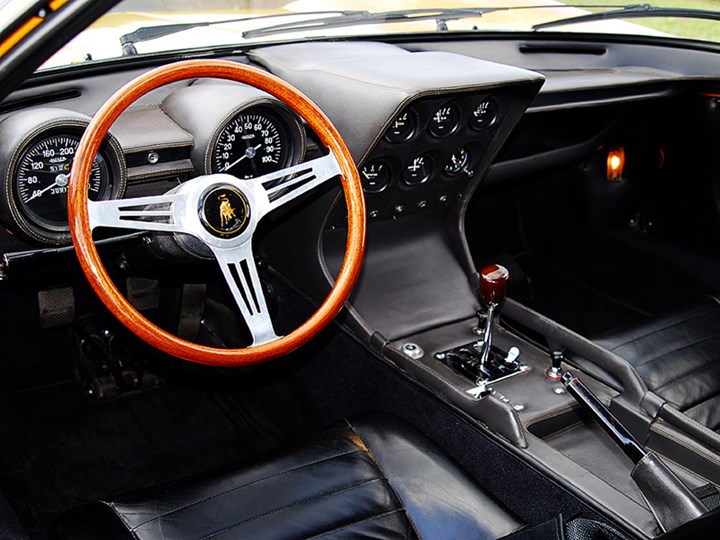 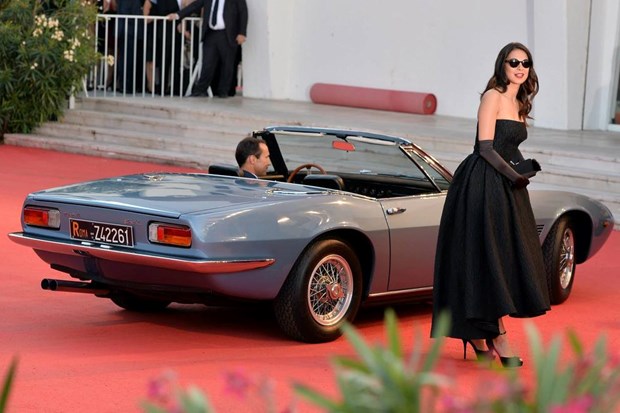 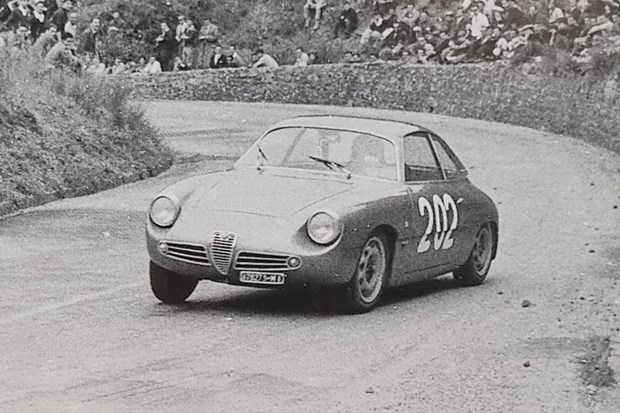