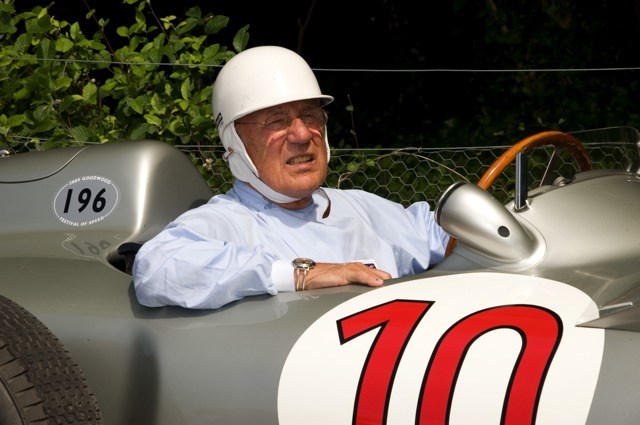 The Festival of Speed is far more than just a hillclimb: it can justifiably claim to be the world's biggest and most diverse celebration of the history of motor sport and car culture. It is the only occasion where you will see the greatest competition cars and star drivers from all eras in action: everything from 19th century steam carriages to current Formula One; fabulous racing motorcycles; classic rally cars to 3000bhp dragsters; plus motor sport legends like Moss, Surtees, Fittipaldi and Andretti rubbing shoulders with today's hottest properties such as Lewis Hamilton, Jenson Button, Fernando Alonso and Petter Solberg.

Motor racing first came to Goodwood in 1936 when the 9th Duke of Richmond held a private hillclimb through the park. Five years earlier he had won the Brooklands Double 12, and then in 1948 he went on to open the famous Goodwood Motor Circuit. These early events inspired his grandson, the present Earl of March, to bring motor sport back to Goodwood. This resulted in the first Festival of Speed, held in 1993 in the picturesque parkland surrounding Goodwood House.

Since the inaugural meeting, the Festival has become established as a key event in the motor sport social calendar. But it is not all about action on the hill. A 2.5-kilometre loose-surface rally stage - cut into the wooded area close to the hillclimb finish line - has around 30 cars from the history of rallying providing a thrilling demonstration of sideways driving throughout all three days of the event. Unrestricted access to the paddocks means that spectators and autograph hunters can get closer to the cars and drivers than at almost any other meeting.

Away from the bustle of competition, you can relax with a picnic on the lawns of the House among some of the most beautiful and innovative automotive creations, which are judged in the Cartier 'Style et Luxe' design competition. You can explore the exciting displays of our many exhibitors, or visit the Goodwood Technology Pavilion

(FOSTech), that showcases a variety of exciting new technologies from the motor manufacturers, design specialists and other motor industry suppliers with a strong emphasis on future environmentally-considerate motoring and personal mobility.

You can seek an adrenaline rush from the Festival's interactive entertainment, including driving simulators and 4x4 driving, children will delight in the special amusements to be found at the Junior Festival of Speed and the Supercar Paddock will delight visitors of all ages with a mouth-watering display of the very latest exotica for the road.

The Festival is motor racing's equivalent of Ascot or Wimbledon: an extravaganza of sound and colour that has been described as 'the garden party of the Gods'. In combination with the rich period theatre of the Goodwood Revival, the Festival of Speed ensures that Goodwood is unrivalled throughout the world.

With the annual Festival of Speed now over for another year, Goodwood is reflecting on a fabulous weekend that attracted a credit crunch-defying 152,000+ motor sport fans - the second highest Festival attendance ever - as well as over 120 star racing drivers and riders.  These included reigning World Champions Lewis Hamilton (F1) and Sebastien Loeb (WRC), as well as the current F1 World Championship leader Jenson Button.  Below is a snap shot of just a few of the highlights from a very memorable weekend at Goodwood.

Formula One: The F1 drivers and teams put on a great show for the Festival spectators with spectacular demonstrations of car control and lurid donuts.  Lewis Hamilton said "It's a shame we're not allowed to do donuts at races," but he more than made up for this at Goodwood, as did Timo Glock in his Toyota and Red Bull Racing's Mark Webber.  The 2009 F1 World Champion elect Jenson Button drove a mighty 1934 Mercedes-Benz W25, saying "I thought I'd give it a go, although the brake and throttle are 'round the other way to what I'm used to!"

Forest Rally Stage: Five-time World Rally Champion Sebastien Loeb was on stellar form in his Citroen C4 WRC.  Despite never having seen the Goodwood course prior to his maiden run, he flung his C4 around with abandon and instantly established a benchmark time considerably faster than the next man.  His team mate Dani Sordo also put in a blistering performance on the stage on Sunday, as did legendary rally drivers Walter Rohrl, Stig Blomqvist, Rauno Aaltonen, Hannu Mikkola and Bjorn Waldegard throughout the weekend.

Anniversaries:  Audi celebrated its 100th anniversary in great style at the Festival, with a jaw-dropping 'central feature' display outside of Goodwood House, a popular exhibition site, and a mouth-watering selection of historic Audi racing cars, including Auto Unions, quattros and R10 and R15 Le Mans racers.  The centenary of both Bugatti and Morgan were marked by Goodwood too with some truly desirable cars.  The 75th anniversary of the German Silver Arrow racers saw a record gathering of 14 examples from Auto Union and Mercedes-Benz, and a paddock row filled with 14 Porsche 917s (40 years after its introduction) proved to be a highly popular site.  Fifty years of the Mini was also honoured with various examples of the Issigonis classic at the Festival.

Cartier 'Style et Luxe':  Judging was frantic in this annual automotive design concours, with Will Young, Jasmin Le Bon, James Martin and many other star judges finally declaring the stunning 1934 Hispano-Suiza H6C Xenia the Best of Show against some very stiff competition.  On Festival Sunday, the Cartier Lawn had the added attraction of 'The Magnificent Seven, a collection of desirable Ferraris owned by presenter Chris Evans, with six of the seven resprayed in dazzling white to help raise funds for the BBC Children In Need charity.

Timed Run Shoot Out:  For the first time in many years, Sunday afternoon saw the fastest timed cars up the 1.16-mile Goodwood hillclimb shoot it out against the clock in an exciting timed run.  Festival stalwart Justin Law aced the course to take the Fastest Time of the Day award aboard a Jaguar XJR-12 in an astonishing 44.40-seconds.

Other attractions over the Festival weekend including a run of the very latest supercars and interesting low-emission vehicles, spectacular air displays by the Eurofighter Typhoon and Red Arrows, some stunning bike runs by many top motorcycle riders, a record-breaking Porsche 48-hour human endurance run, stacks of new model debuts in FoS-TECH and the exhibition stands, the Wacky Races and Junior Festival of Speed, plus hundreds of important historic racing cars and drivers.

All-in-all, the competitors and spectators agreed, the 2009 Festival of Speed was a truly wonderful weekend of entertainment.  With so much to see and do, the spectator feedback suggested that this was the best of the 17 Festival of Speed events to date.  Lord March and his team are already hard at work planning the 2010 Festival, although before that they have the 2009 Goodwood Revival to keep them busy, which takes place this year from 18-20 September.

We've created some interesting facts and figures of some of the bizarre and wonderful things that are taking place at Goodwood :

• More than 150,000 visitors are expected to visit the Festival of Speed to see their favourite star cars, motorcycles, drivers and riders in action

• If laid end to end, the straw bales would stretch for nearly 10 miles

• During the Festival 60,000 cars are parked up and would stretch from Goodwood to the London Eye and back again if parked end to end

• Over 5 miles of temporary roads laid

• Over two thousand bottles of Veuve Clicquot champagne are quaffed

• Goodwood is located very close to Chichester and Bognor Regis, which are statistically the sunniest places in the UK