The Vintage Collingrove Hill Climb was conceived by the Sporting Car Club of South Australia as an event for cars built between 1919 and 1939. This year, on October 5th, the venue was honored with the presence of a dozen Delages-a particular honor, since the event takes place on land purchased from the Angas family's Collingrove property near the Barossa Valley town of Angaston. Collingrove is near Barossa Valley, NE of Adelaide.

During the roaring Twenties, the Angas family owned a number of rare Delages, and two of the younger Angas brothers, Colin and Bob, created the hill climb track in the early 1950s. This year, Colin Angas, now 88, was a keen spectator in the hillclimb paddock. Colin recalled some of his Delage memories for VeloceToday.

Colin's grandfather Charles had owned a 1926 Delage 14hp DISS. He recalls the car came to their property regularly. "It was a mahogany boat-tailed tourer in dark green with black guards - a really delicious motor car. Every engineering student who went through Adelaide University at one time owned and thrashed this car!" It currently resides in country Victoria.

"Ronald Angas, my father, also had a 1926 or '27 14hp Delage, though not a DISS. I traveled home with him from Adelaide on the bare chassis with just a box for seating. He had built, at Collingrove, a two-seater closed van-type body so that two could sleep in the back. Both running boards were made up as big 'tucker' boxes (Australian for 'food'). Alongside the driver's right side was a vertical mounting for a .22 calibre Mauser rifle - probably the most noteworthy feature for a small boy. "He and my mother did thousands of miles of bush trips in this car, often through sand, venturing as far as Queensland. In the outback in those days, double declutching was virtually unknown, so that cars with conventional gearboxes had to stop to select a lower gear, often resulting in getting bogged. The vehicle of choice for most people in this type of country was the Model T Ford or the Dodge four. In these cars a skilled driver could engage a lower gear on the move. The Delage was equally capable in this regard. My father was hard on his cars and sadly no photo or record of what happened to it remains." The Angas family on a picnic in Australia in 1924 with two Spinx-bodied Delages. From "Delage, France's Finest Car". Courtesy Dalton Watson.
Read review.

Colin remembers one particular incident in which the Delage became a home-made piece of artillery equipment. "On this car the spare wheel was fitted on the rear of the van at something of an angle. Those were the days of fairly primitive radio reception in the home and the aerial was of vital importance. My father had been a keen skier when at Oxford and had brought back several pairs. He lashed two skis to the spare wheel to form the vee of a catapult. To power it he used a length of one inch diameter rubber belting from the overhead grinding attachment on his lathe. "This fired a weight, with a string attached, over a high bough of a gum tree near the house, enabling an aerial wire to be pulled up very high. Once again, no photos were taken, but for me it was something to remember".

Another of Ronald Angas' Delages was a 1927 Saoutchik tourer-bodied 40/50hp GL, which was later altered into a two seat sporting style by Sphinx of Adelaide. The crankshaft was also remodeled, into pieces, while the car was pulling a 3 ton roller to level some land for a polo ground. The fate of this GL is unknown. The roller survived and was used to good effect during the construction of the hill climb course in the early 1950s.

Ronald's brother Dudley and his friend Henri drove a Grand Sport Delage across America in the winter of 1923. Dudley was reported as saying "One thing I have noted about this Sport Model is the extraordinary way it negotiates ice roads without any danger of skidding". When they got to Tennessee they were arrested as bootleggers, as they were over the 8mph speed limit. To secure their release they paid the $12.50 fine. All of this had an effect on young Colin. In the early 1930's Colin was attending boarding school and shared 'The Autocar' magazine with a friend. "I became fascinated with hill climbs, Shelsey, Prescott, etc, and in particular the various Specials which enabled many to compete who could not afford expensive and desirable sports cars. "The war intervened, time passed and in 1951, after a race at Woodside, the South Australian Government banned motor racing on all public roads. I felt that a circuit on private property was not practical, but that a hill climb was achievable, and explored our property for possibilities. I co-opted my brother Bob and his friend Harold Clisby, both enthusiasts who later raced MGs. Bob had a 1100cc drop-head Porsche and held his class record on the Hill for some time. "Those were the days when amateurs in MGs could at least be on the same circuit with the 'greats' such as Lex Davison and Doug Whiteford. Eventually we found a site on Bob's land with great potential, part of the Collingrove property. Utilizing the skills available from members of the Sporting Car Club, a final track layout was decided and preliminary road formation was begun.

"Between Bob and myself, we had wheel tractors, a crawler and ripper, a 4 wheel towed grader, 'that' 3 ton roller which had 'done in' the 40/50 Delage during the polo ground work, and truck mounted fire fighting equipment for wetting down and consolidating the metal base of the track. The final grading finish prior to bitumen was carried out by the Angaston District Council Caterpillar grader which had a much longer wheelbase than ours." Together with many working bees from the Club, the track was brought to the stage for bitumenising which was carried out by the Shell Company under Club supervision. Bob and Colin donated the entire use of their plant, employees' wages and fuel to the project from bare paddock to the final metalling. The four wheel grader which did the major work now resides with Colin's son John in the Barossa Valley.

No doubt, Colin Angas was pleased to be able to see the vintage Delages on the property once owned by his family. In the car park the Delages were an impressive sight. They had taken the coast road from Melbourne, five hundred miles to the east in Victoria, with an overnight stop at Port Fairy, lunch at Mount Gambier in South Australia, overnight at Robe then onto Tanunda in the Barossa Valley on Saturday. On Sunday the cavalcade drove a lap of the 14 kilometer Lobethal circuit supporting the Grand Carnival celebrations. Delages in the car park enjoy the Aussie spring weather.

This year, entries included some invited post-war vintage-style cars and ranged from Austin 7s to a ten liter aero-engined Talbot. In between were U.K. makes from Allard to Vauxhall and specials powered by Hudson and Plymouth. Running on the hill for the French connection were Andrew Cannon's 1928 Bugatti Type 37A and John Lawson's 1936 Delage D6 70 Le Mans (both fresh from the Lobethal Grand Carnival the day before) and Janis Priedkalns' Argentinean Pur Sang Bugatti Type 35B recreation.

The emphasis in this meeting is on participation rather than winning, though all eyes are on the scoreboard for the times over the 750 meter long route. Deceptive at first glance, the climb is immediate and includes a steeply sideways angled section known as "The Wall." A very sharp right followed soon by a tight left rewards confident drivers who keep up the revs to the top of the hill.

Lawson's 1936 Delage D6 70 Le Mans made an impressive sight and sound going up the hill several times during the day. Its next exercise will be in the November Classic Adelaide Rally. While you wouldn't want to carry much more than a toothbrush in its door pockets, the same couldn't be said of the Delages in the car park. Tourers in the grand style, these cars are all in good hands. The enthusiasm of their owners and the road dust on the fenders prove that.

With thanks to Colin & John Angas, Max Foster and members of the Delage Club of Australia and the Sporting Car Club of South Australia.

Scroll down for more Delage photos courtesy of Vince Johnson 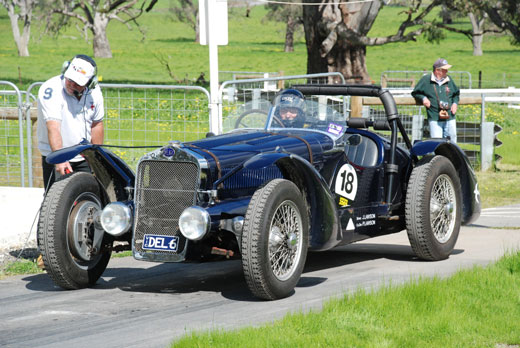