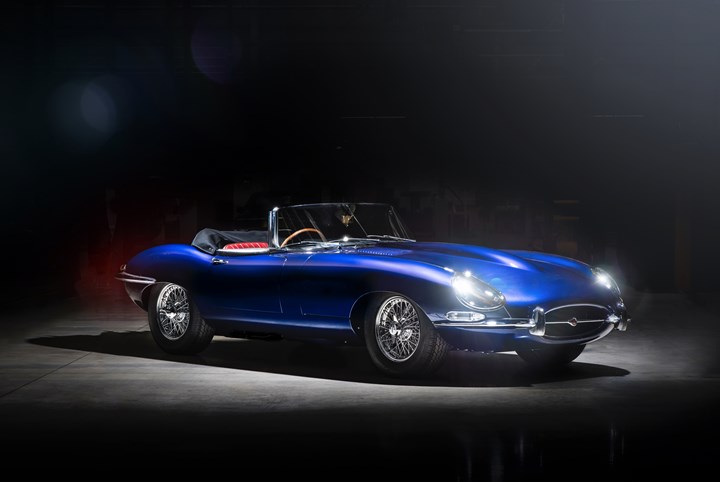 Jaguar Classic showcased a bespoke Jaguar E-type at the Queen’s Platinum Jubilee Pageant on 5 June 2022. The one-off renovation features a comprehensive list of enhancements carried out by the expert technicians at Classic Works, and metallic blue paintwork inspired by the Union Jack.

The unique E-type made its debut alongside fifteen iconic Jaguars to feature in the Jubilee Pageant, including a selection of historically important Jaguar E-types, an all-electric I-PACE eTROPHY race car, and seven convertible Jaguars all carrying famous Dames. The customer, thrilled to participate, was joined by American dancer, model, and fashion designer, Eric Underwood in the passenger seat.

Jaguar Classic creates beautifully crafted E-types by restoring Series 1 models to their original specification. This bespoke example goes even further, showcasing the full breadth of personalisation available from its state-of-the-art home in Coventry. 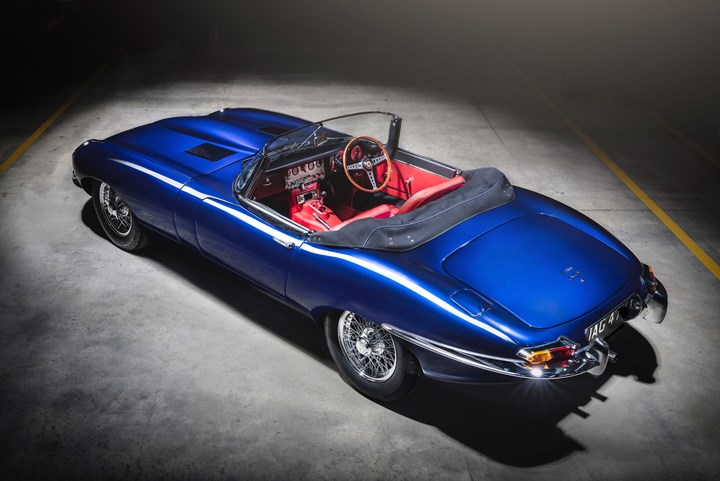 The one-off E-type was commissioned by a client who had specific requirements. He wanted a Roadster manufactured in the year he was born and finished to a bespoke specification. The team at Jaguar Classic set to work and tracked down a Series 1 E-type that was built just two days after the customer’s date of birth.

Over the following 12 months, the car underwent a complete rebuild, beginning with the bodywork. Finished in a unique deep metallic blue inspired by the blue of the Union Jack, the new blue, was exclusively mixed by the paint shop following numerous consultations and sample creations to craft the perfect hue over several months.

Customer requested a Roadster from the year he was born, and Jaguar Classic’s sourcing team tracked an E-type built to just two days of the customer’s birthday 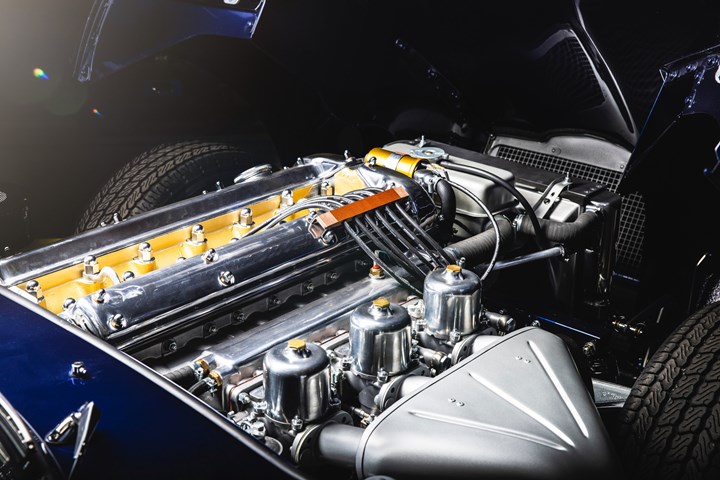 Bespoke Lead Engineer, Jaguar Classic, Stephen Hollis, said: “Being able to bring a customer’s vision for their dream E-type to life is hugely rewarding. The result is a complete one-off that show cases the full breadth of capabilities provided by the team at Jaguar Classic. With a colour scheme inspired by the Union Jack, I can’t think of a better place for it to make its first appearance than the Queen’s Platinum Jubilee Pageant. I am so excited to see it parade down The Mall.”

With the body assembly and paintwork complete, the engineering team went to work refitting mechanical elements – including a host of enhancements. The original 4.2-litre straight-six was replaced by a larger4.7-litre engine, delivering superior performance. It is optimised for road driving and married to Jaguar Classic’s specially developed five-speed gearbox, for a smoother, quieter and more refined driving experience.

Uprated suspension ensures the chassis can exploit the performance provided by its powertrain, while wider wheels, tyres, and uprated brakes deliver superior grip and confidence. A sports exhaust and manifold ensure the E-type’s soundtrack suits its dynamic character. 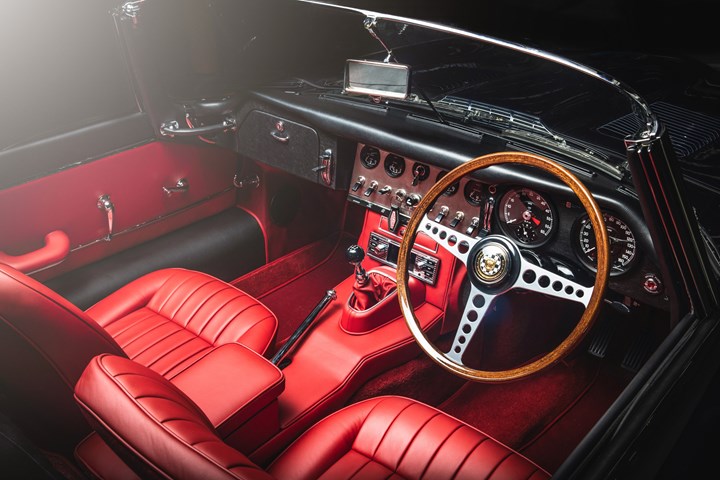 Modern technologies include 21st century connectivity provided by the Classic Infotainment system – combining touchscreen controls, satellite navigation and Bluetooth with a period-look that is perfectly in-keeping with the rest of the vehicle. Powerful exterior LED lighting also brings illumination up to modern standards for additional confidence driving at night.

A series of bespoke details complete the vehicle, including a unique plate and dash plaque. In addition, this one-off blue E-type features a few elements inspired by the limited E-type 60 Collection.

The new owner said: “I wanted a classic E-type that could be relied upon for daily driving and be comfortable on Grand Tours while remaining authentic to the original – and I’m blown away by the results. You sense the history and knowledge when you enter the Jaguar Classic Works facility and even after several visits, I still get excited to be in the building. I’m so proud of the car the passionate team there has created, and I’m privileged to be part of its story.” 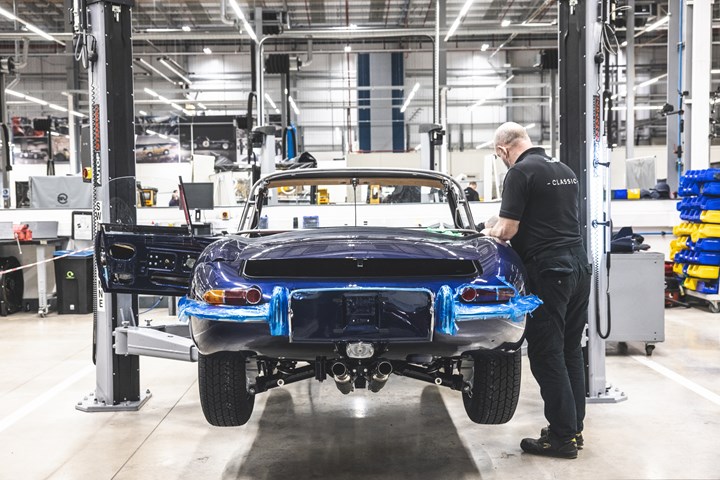 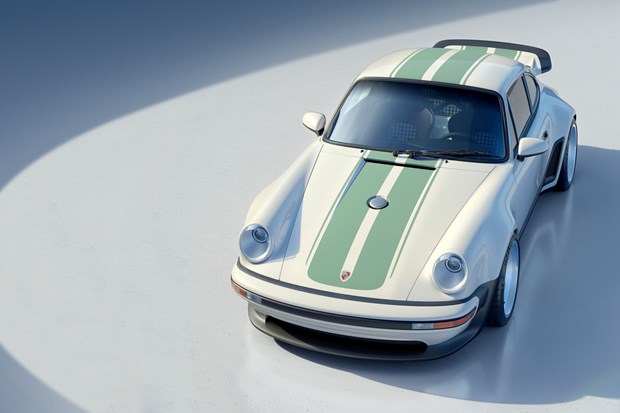 Singer's Turbo Study is the pinnacle of air-cooled turbocharged 911s 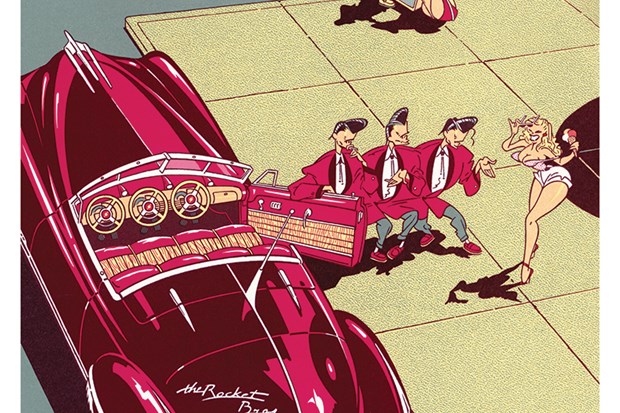