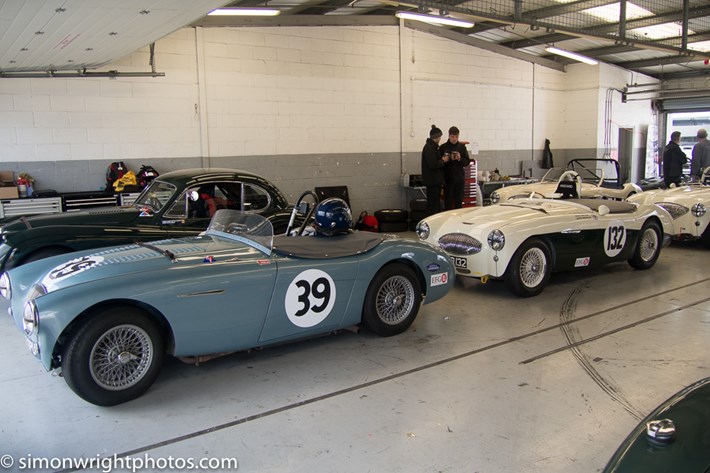 The Vintage Sports Car Club (VSCC) had a Royal visitor to their season opening race meeting on the national Silverstone circuit. HRH Prince Michael of Kent, cousin of the Queen, was at the circuit and presented the winner of the Stanley Mann Trophy to the highest placed Bentley in the feature race, the GP Italia & Lanchester Trophies race.  The Race was won by Tom Walker in an Amilcar-Hispano Special ahead of Patrick Blakeney-Edwards in his Frazer Nash Super Sports and Tony Lees in the AC/GN Cognac. The highest placed Bentley was driven by Clive Morley who put the Bentley 3/4 1/2 litre in 10th place overall. Clive was presented with the Stanley Mann Trophy after the race, in the paddock, by HRH Prince Michael of Kent. One of the more unusual cars was in this race, a recently restored Hotchkiss AM80 driven by Steve Smith. The offset body of the car and the long aerodynamic tail showed that the car was originally designed to race at Brooklands on the banked over track. At silverstone he finished  in 16th place.

The first handicap race for the Silverstone and Fox & Nicholl Trophy was won by Ruediger Friedrichs in an Alvis Firefly by 3.45 seconds for Sam Stretton in an Alta Sports while Durward Lawson was third in a Riley Special. VSCC Regular Dougal Cawley who started from Pole position in his GN/Ford Piglet finished 4th.

The second race was a special event for pre and post war Frazer Nash and GN cars. The entry saw thirty six Frazer Nash models compete with just two AC.GN cars on the grid. Eddie Gibbs took Pole position and was in the lead when the race was stopped after eight laps with a Red Flag due to the Frazer Nash BMW 319/28 of Tom Thornton loosing a rear wheel and the car ended up in the middle of the track at Brooklands corner. So Gibbs was the winner in his Frazer Nash SS Racer only 1.71 seconds ahead of Martin Hunt in his Frazer Nash Le Mans Replica. Tony Lees took 3rd place in his AC/GN Cognac.

The VSCC invite other organisations to stage races at their meetings and the Historic Grand Prix Constructors Association (HGPCA) arrived with a grid full of pre 1966 Grand Prix cars. Sam Wilson took pole position but did not take the start and it was Peter Horsman who led from the start to win in his Lotus 18/21 from Barry Cannell in a Cooper T51 and Ruediger Friedrichs in a Cooper T53.

Next out were the Standard and Modified pre-war sports cars and the Frazer Nash again demonstrated why it is one of the most successful type of car for vintage events. Jo Blakeney-Edwards in her Frazer Nash Super Sports beat Philip Champion in a similar car with Mark Groves making it a Frazer Nash 1-2-3 in his TT Rep Emery. Adrian Van Der Kroft was 4th in a Morgan 4/4.

The longest race of the day was another ‘outsider’ race by Fiscar for the Tom Cole Trophy. The 30 minute race for sports cars from the 1950s and early 60s saw Darren McWhirter take the chequered flag in his Lagonda v12 Le Mans ahead of Steven Boultbee-Brookes in an Aston Martin DB3s and Christopher Keen in the American Kurtis 500 S.

The short handicap race for Pre-war cars saw the Riley 12/4 Special of James Whoitmore take the win from Trevor Swete in an Invicta S Type with John Skeavington 3rd in an Austin Ulster Replica.

Some of the most beautiful cars were on track for the 1950’s Sports and Sports Racing Cars 10 lap race. There were a pair of Lister Knobbly’s against Tony Bianchi at the front in his Ferrellac Allard Sports and it was Mark Lewis that eventually took the win in his Lister Knobbly ahead of Bianchi, while the other Lister Chevrolet Knobbly of Roberto Giordanelli had problems at the start and dropped down the field, before a storming drive that saw him fight his way past several cars to finally claim 3rd place.

The Patrick Lindsay Memorial and Amschel Rothschild Trophies race for pre-1961 racing cars saw Philip Walker put his Lotus 16 on pole position but he was beaten in to 2nd place by Andrew Smith in his Lotus 12 who won by over 12 seconds, while Frederick Harper in the Kurtis Indy Roadster was a very close 3rd only 0.2 of a second behind Walker.

Another invited series was the AR Motorsport Morgan Challenge which was a one car race with Keith Ahlers winning from Pole position in his Morgan Plus 8 by over 28 seconds from Philip Goddard in another Plus 8 and Elliot Paterson in a Morgan Roadster in 3rd.

The final race of the day was a ten minute scratch race for Pre-war cars. With three ERA’s  leading the field and Nick Topliss on pole in ERA R4D, it was Duncan Ricketts who took the win in his ERA E-Type with Topliss over six seconds behind in 2nd. Ensuring a complete ERA podium was Terry Crabb in 3rd in ERA R12C.

The meeting was a complete success, despite the cold wind blowing across silverstone, with plenty to keep the spectators occupied, including a fabulous selection of parked vintage cars on display in the paddock. 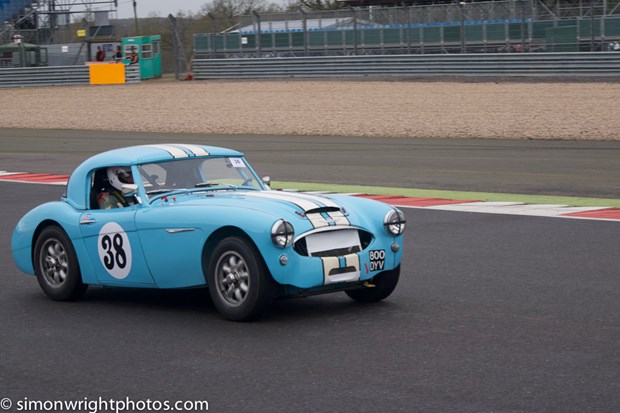