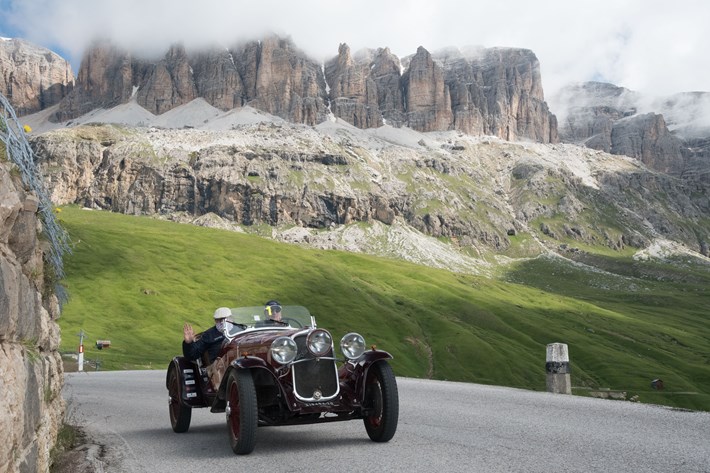 The 33rd Stella Alpina has come to a close. The regularity rally organised by Scuderia Trentina in partnership with Canossa Events ran from July 6th to 8th this year: three exciting days of driving on the most scenic itineraries in the Dolomites and across the most exhilarating passes in the Italian Alps.

For 2018, the Organisers wanted to create a really special event, taking the crews up to the mountain tops along the most spectacular and challenging roads in the Dolomites. The winning combination of sport, passion, spectacular panoramas, hairpin bends, superb hospitality and breathtaking scenery in the marvellous Dolomites, delighted all those taking part: people who love competing with their cars but appreciate the opportunity to see new places and sample some special food and wine at the same time.

The event was divided into two sections: one reserved for classic cars and another for modern Ferrari’s, with more than seventy crews at the starting line, soaking up the friendly yet competitive atmosphere.

This year, the Stella Alpina was part of the new “SuperClassiche” Italian Trophy, promoted by ACI Sport and assigned to just seven of the top regularity rallies in Italy. Along with the Terra di Canossa, it is the Trophy rally with the highest number of applicants.

The Challenge and the Podium

There were 99 challenging timed trials and 6 average speed trials, putting the crews to the test and getting everyone’s pulses racing. All were tough trials, set in stunningly attractive scenery along a 450 km route taking the crews across the most beautiful passes in the Dolomites,

The battle to win the rally continued until the last leg was over, in fact the ranking for first and second place changed several times until the final day when the winners were announced during the Awards Ceremony held at Cantine Ferrari.

After battling it out head-to-head, Guido Barcella and Ombretta Ghidotti took the podium of the classic cars in their 1938 Fiat 508C. Second place on the podium went to the Aghem-Conti crew in a 1938 Bmw 328 roadster, and third place went to crew 7 D’Antinone-De Biase in a 1969 Porsche 911.

The top step on the podium for the modern Ferraris went to Giordano Mozzi and Stefania Biacca in a Ferrari 458 Spider, who were the unrivalled leaders of the ranking from day one, followed by Trifero-Trifero in a Ferrari 456MGT and Carretti-Furlan in a Ferrari 488 Spider.

The Ladies Cup went to Guaita- Arnoldi in a 1971 Lancia Fulvia coupé 1.3 S II series who also came first in the ranking for the Average Speed Trials.

The gorgeous Aston Marin DB 4 driven by Astorri-Zucchini won the Classic Car Prize assigned to the most elegant car.

Sparing a thought for others

During the spectacular events planned for Saturday, after driving up to a high altitude at Alpe Lusia and admiring the picture-perfect view as the sun set over the Dolomites, a genuinely touching moment awaited the crews.

Luigi Orlandini, CEO of Canossa Events, had organised a surprise meeting for the crews with Fiorentina soccer team, who were staying in Moena for their usual pre-season retreat and represented at Valbona by legendary world champion Giancarlo Antognoni and coach Stefano Pioli.

He also organised a special charity event with a silent auction held during dinner, when the crews fought it out to take home a football autographed by the squad. The crews responded generously, raising almost 6,000 Euros between the highest bid and donations, given to the City of Moena to help clean up the havoc caused by recent floods.

The autographed football was taken home by Enrico Zobele from Trentino, the patron of the event.

The route and the legs: the event day by day

On Thursday 5th July, the organisers gave the crews a taster of the race with a regularity trial held by a well-know celebrity: Giordano Mozzi, several times Italian champion, three times winner of the Stella Alpina and twice winner of the Mille Miglia. An opportunity to “fire up” the engines and get to grips with the chronometer in a fun-filled but thrilling climate of anticipation.

The grounds at Cantine Ferrari started to fill up on Friday 6th July, as over seventy crews arrived for the Stella Alpina, all full of enthusiasm and ready to take up the challenge presented by the roads in Trentino. Race documents were checked, the welcome gifts offered by the sponsors and organisers were handed out, and the cars were inspected and admired: a truly superb parterre for any Classic Car enthusiast and fans of the Prancing Horse.

The starting line was in Piazza Fiera in the centre of Trento, where the cars were presented to the public under the watchful eye of the ancient city walls.

The race got off to a start and the cars headed off towards Baselga di Piné and the relatively unknown and unspoilt Val di Cembra for the first series of trials. After a warm welcome and a pause in the village of Sover, the crews set off once again for Val di Fiemme, Cavalese, Lavazé Pass, Obereggen, Lake Carezza, Costalunga Pass, and finally Pozza di Fassa, where a welcome party had been organised with local folklore groups putting on a show.

After dinner, the crews rested overnight in accommodation arranged in the best hotels in Moena.

Saturday was set aside for a challenging itinerary through the spectacular scenery of the Dolomites: a panoramic but complex route crossing seven passes in the Alps, including Pordoi, Campolongo, Gardena, Sella, Fedaia and Valles.

The cars drove through Canazei, onto Passo Pordoi and around the Sella Group, continuing through Arabba, Corvara, Passo Gardena, and then back to Canazei. Afterwards, they headed off again to Lake Fedaia before driving down to Alleghe, Agordo, Falcade, Valles Pass, spectacular Paneveggio forest, Bellamonte and Predazzo, ending their long tour in the centre of Moena amidst a well-deserved throng of admirers.

The second leg was expected to be the most challenging of all three; the one that would have the greatest sway on the final ranking. And so it was, with a fierce battle for first and second place. Between one series of trials and the next, the crews revelled in the generous Trentino hospitality with welcome breaks organised with the support of local tourist offices in Corvara, Canazei and Agordo. The crews enjoyed lunch on the shore of Lake Alleghe, with the cars lined up for passers-by to admire. And when they arrived in Moena, the public was again out in force to cheer on the cars.

There was just enough time to relax and chat about the race so far before heading off up the mountain to Chalet Valbona, where the view across the Dolomites took everyone’s breath away.

It was a special evening celebrated by the crystal-clear sunset over the Alps. And then there was the surprise encounter with two icons of Italian soccer: legendary world champion Giancarlo Antognoni and Fiorentina coach Stefano Pioli. It was also the occasion for a fine event to help the town of Moena, devastated by floods over the last few days, but already picking itself up with pride. During dinner, the crews took part in a silent auction, bidding for a signed football with the autographs of all the Fiorentina team players. The crews responded generously, collecting a considerable sum to donate to the town of Moena to help repair the damage caused by the floods. The autographed football was taken home by Enrico Zobele from Trentino, the patron of the event.

The evening was also an opportunity for Lady Luck to come calling, in the draw for several fabulous prizes from the partners of the event, handed out by CEO of Scuderia Trentina, Fiorenzo Dalmeri. Two helmets offered by MOMO Design went to crews Rebecchi-Rebecchi and Del Bufalo-Del Bufalo, whilst crews Sacco-Costa and Angelino-Angelino took home two Borino S with Stella Alpina customisation offered by Digitech Timing.

Sunday got off to a start at Vigo di Fassa, then drove through Val di Fiemme and the Valle dell’Adige to Lavis, the leg’s final destination. En route, the last groups of trials decreed the final winners.

The crews then returned to the original starting point, closing a virtuous circle at Cantine Ferrari, for the highly-anticipated awards ceremony.

There was time to relax and chat with the other crews while waiting for the rankings to be published, trading stories about the trials and the route, saying goodbye to old and new friends and making a date for the 2019 rally.

The cups and watches were on display in the room where the winners were to be announced, the timekeepers handed over the rankings, the doors opened, and all the team was ready to welcome the competitors and the winners of this edition…

What People are Saying

Crew Barcella-Ghidotti, winners of the overall ranking and the Azimut trophy, were beaming: “After taking the Winter Marathon, this was the first important rally we took on with the intention of adding our names to the role of honour for the first time. We managed to pull it off, beating many very valid rivals, first of all Gianmaria Aghem and Rossella Conti, mainly thanks to our steamroller of a second day that countered our rather lustreless day one. The climbs were tough going for our pre-war car but in the end we reached the goal we set ourselves”.

Patron of the event, Enrico Zobele, explained the ties linking the Stella Alpina with its glorious past: “The Stella Alpina is a special rally and I am proud to be its patron. It is a challenging race with lots of kilometres to cover and mountain passes to cross, but it is also a rally that gives you the chance to take a look around and enjoy some spectacular scenery, the trees in bloom, the Dolomites, some marvellous modern and classic cars who are the real protagonists”.

A smiling Fiorenzo Dalmeri, CEO of Scuderia Trentina, thanked everyone, adding: “We are not just good at our job, we are also lucky to be organising the Stella Alpina in such a beautiful, exceptional and hospital area. It is also a place that has a great love of motoring. I think this combination of unique scenery and marvellous cars is also an excellent way to promote our area and its unique and spectacular natural attractions. And since we talked about the love of motor sports, I think it is my duty to mention another of our fabulous attractions: the legendary Trento Bondone hill climb, the most important in Europe that was held just recently”

Scuderia Trentina and Canossa Events would like to thank all those who helped to make the event such a success: first of all the competitors, be they newcomers or old-timers, whose enthusiasm made this year’s rally truly unique.

Thanks to the City and the Provincial Government of Trento, the City of Moena for hosting the event, as well as all the local authorities in the towns we passed through, Automobile Club d’Italia, all our friends at Scuderia Trentina, the many CSAI Rally Officers, all the race management staff, and all our supporters and volunteers as none of this would have been possible without their support.

The success of the Stella Alpina was also possible thanks to our prestigious partners, especially Azimut Wealth Management, main sponsor acknowledged with its own challenge Trophy; Cuervo y Sobrinos, who presented 2 splendid watches to the winners; Banca Galileo that gave the prize to the best Scuderia; and Cantine Ferrari who hosted part of the event and was acknowledged with the ranking of the modern Ferrari’s. Thanks also to Fassi, Zuccari who presented each crew with a product pack; Tridentum Auto who made several splendid Maserati’s available to the Organisation; Digitech, MOMO Design, and Gare d’Epoca which commemorated the most elegant car. 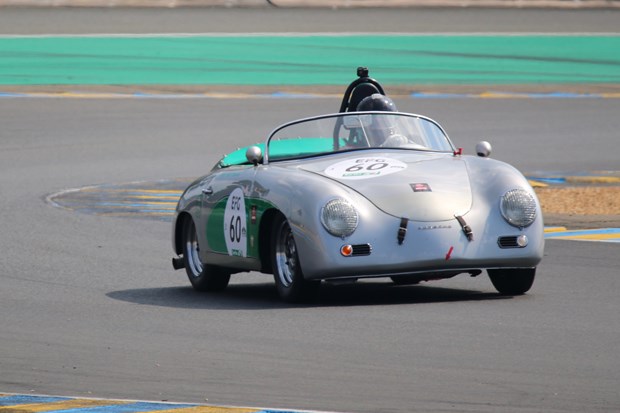 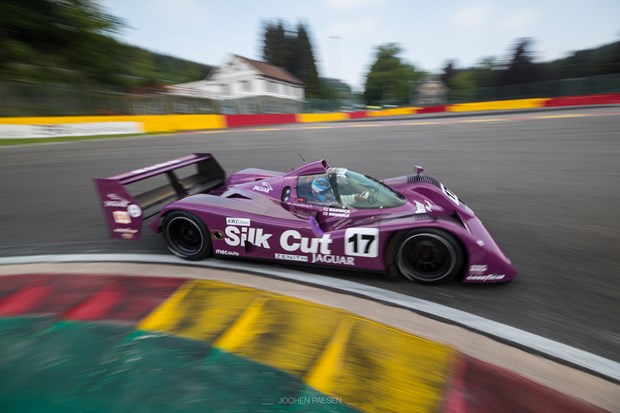