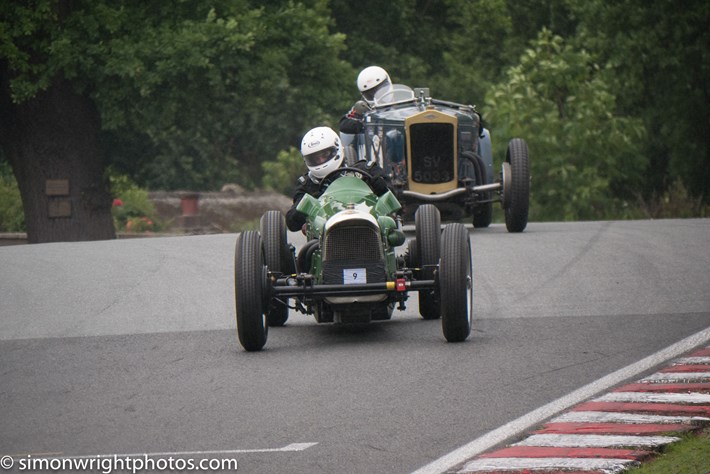 Upon arrival at Oulton Park it was dry and cloudy for morning practice. Behind the main paddock, there was an AutoSolo event taking place, an auto test where cars compete in a specific direction round a course marked by traffic cones. There were over twenty entries for the event, consisting of road going pre-war touring and sports cars. The little Austin 7 Ulster of Jon Fleming won the event ahead of the Frazer Nash BMW saloon of Richard Gatley. Nicolas Williams was the winner of the long wheelbase class in his Morris Sports Tourer.

Another long standing feature of this meeting was the Cheshire Life Concours for VSCC members. There were some unusual cars on display including a 1914 TT Humber and a 1938 Darracq Talbot Largo. The winner was Brian Green with his 1934 Lagonda M45.

Due to a cancellation of one of the invited supporting series races, an additional scratch race was added to the programme before lunch. Race zero was a 20 minute scratch race for pre-war cars. Justin Maeers took the first win of the day in the GN Parker winning by just over 28 seconds from Tom Walker in the Amilcar Hispano Special. In 3rd place was Class A winner Christian Pedersen in an Austin 7 Special.

After lunch, it was the Oulton Park trophy for special pre-war sports cars. This saw a three way fight for the lead. Douglas Cawley in GN/Ford Piglet held the other two at bay to win the Oulton Park Trophy, Class D and be the first vintage car home. In 2nd place was Andrew Mitchell only 1.28 seconds behind in his HRG 1 1/2 Litre, winning class B while 3rd place went to Mark Giles in the Aston Martin Monoposto.

The first of the invited series races was the Pirelli Ferrari Formula Classic Series. These sleek sports cars were definitely not vintage, but did add a little variety to the race programme. There was an accident on the first lap which bought out the safety car, which didn’t pick up the first three cars. After the race was released from the safety car period, it was Gary Culver declared the winner in his Ferrari 328 GTB, also winning Group 4. Peter Fisk was 2nd in his Ferrari 550 Maranello, winning Group 6 and Chris Butler was 3rd in another Ferrari 328 GTB, winning Group 3.

The Standard & Modified pre war Sports cars saw a very close battle with victory and the Bill Philips Trophy, first vintage and Class B award all going to Andrew Mitchell in his HRG 1 1/2 litre by just 0.63 of a second from Edward Williams in a Frazer Nash Super Sports. Tim Kellers was best of the rest in 3rd place in a Riley TT Sprite.

The AR Motorsport Morgan Challenge was another invited series and saw a very close finish with Keith Ahlers in his Morgan Plus 8 winning from Elliot Paterson in a Morgan ARV6 less than a second behind.

Half way through the afternoon and the forecasted rain arrived at the circuit. To start it was just fine drizzle which made the track slightly damp for the Boulogne trophy for Vintage Race Cars. Tom Walker went one better than in the first race of the day and he won this race in his Amilcar Hispano Special, beating Justin Maeers in the GN Parker in to 2nd place, over five seconds behind. Mark Walker made the most of the conditions in the ever sideways GN Thunderbug and was 1st on handicap in 6th place overall.

By the time of the Ferrari second race of the day it was raining heavily. Gary Culver took his second win of the day in his Ferrari 328 GTB. Chris Butler improved to come 2nd overall and win Group 3 again.

The heavy rain continued for the Handicap race for pre war cars which saw Simon King drive a masterful race to win in a Morgan 4/4 Le Mans. Alan Harpley was 2nd in an Avon/Alvis Special and Robert Moore was 3rd in an Austin 7.

Always popular, the Formula 3 500 cars were in trouble from the start when the Petty spun off at Deers leap at the start and just gently kissed the barrier with the rear of the car. The race was a clean sweep for Coopers with Richard de la Roche winning in a Cooper Mk5 from Mike Fowler in another Cooper Mk 5. Darrell Woods was 3rd in a Cooper Mk12.

The rain has eased for the last race of the day, a Scratch race for pre war cars. Mark Gillies took his second win of the day in ERA R3A, ahead of a class winning Justin Maeers GN Parker. Tony Seber was 3rd in his class winning Wolseley Hornet Special. 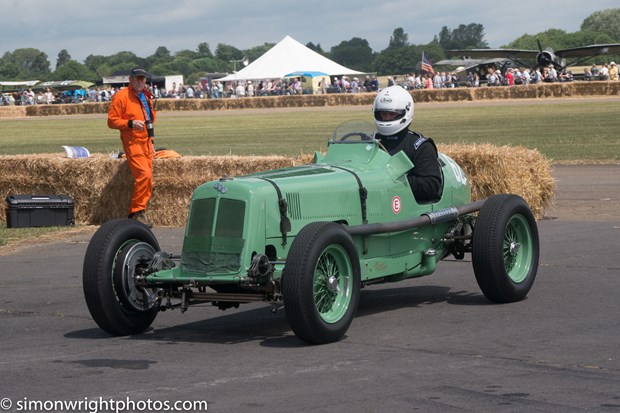 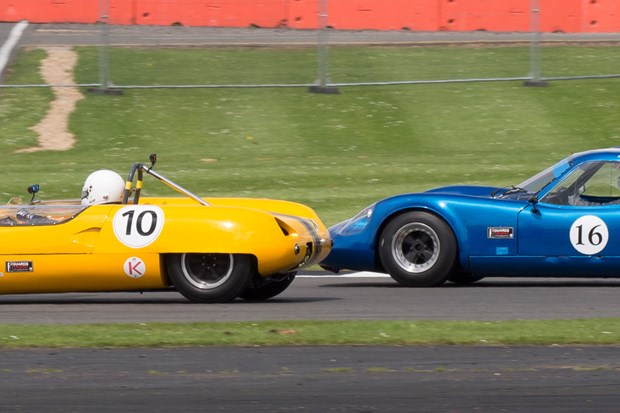