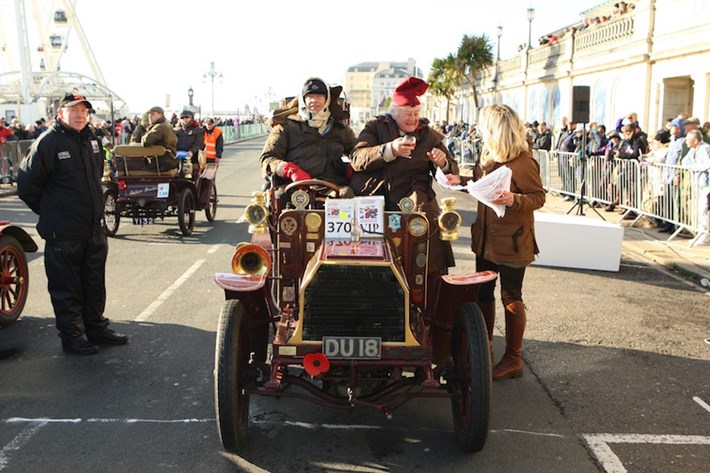 The clocks were turned back more than 100 years on Sunday 4 November as 449 pre-1905 veteran cars lined up in the
torrential rain at Hyde Park, London, to take part in the annual London to Brighton Veteran Car Run – the oldest
motoring event in the world. 5 of the participants only decided to take part last minute having successfully purchased a
vehicle eligible for the run at the Bonhams auction on Friday 2 November. Out of the 449 starters that set out from
London's Hyde Park at 7.00am, 372 successfully made the finish line at Madiera Drive, Brighton. 77 vehicles had to
retire early due to technical problems.

The first to finish was Ian Moore from New Milton, Hampshire crossing the finish line at 10.21am driving an 1899
Panhard et Levassor while the last officially to arrive at Madiera Drive was competitor Derek Payne, from Brisbane,
Australian who limped across the finish line at 4.38pm in a 1901 De Dion Bouton. The vehicle had experienced many
problems along the way, but he remained upbeat and very proud to have completed the run. He said: "this is the first time
I have ever driven a veteran car, the vehicle belongs to my boss. You really have to get use to the brakes and steering, it
takes a great deal of concentration managing the car and battling the weather.” but undeterred he continued, “we’ll be
sending her back to Aus, will fix her up, and return again next year, but for now I can’t wait for warm drink a nice hot
bath”.

Mason once again entered his 1901 Panhard et Levassor Roi-des-Belges, he taken part every year since 1985 and only
failed to finish on two occasions.

Boorman made his debut on the London to Brighton Veteran Car Run having accepted an invitation to join the Shawe
family in their 1904 English Mechanic – which was originally built from plans in a weekly magazine. They finished at
11.5am making it one of Boorman's shortest adventures. He said afterwards: "as I sat on the start line at Hyde Park, in an
open top car, with it lashing down with rain I thought what am I doing here. It was torrential and continued to get worse,
many of the roads were flooded and it was relentless for about an hour and a half. Despite the weather I was blown away
with the amount of spectators that lined the streets to cheer everyone on. I met some great people throughout the day, and
the Shawe family just made it, their enthusiasm was incredible, they didn’t seem to bat an eyelid about the weather. I've
been on adventures all over the world but this was fantastic, a true British experience, in a great British car!"

The Shawe family’s vehicle, a 1904 English Mechanic, affectionately nicknamed Emma was built by Sidney Cheald of
Chesham in 1904, to the design that appeared in a series of construction articles in the weekly magazine “The English
Mechanic and World of Science”. Mrs Joan Shawe restored the car over many years from 1954 to 1972, and
subsequently drove it in many London to Brighton Veteran Car Runs; it is now owned by Mrs Shawe’s son John. The
family has taken part in the London to Brighton Veteran Car Run 33 times since 1972, reaching the finish line on 30
occasions. 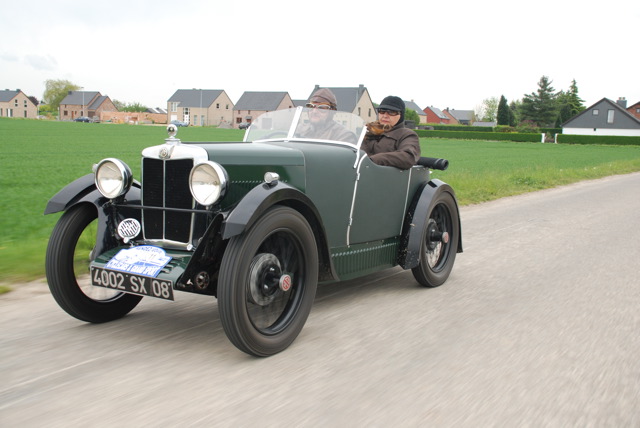 Another competitor was Tony Hirst, best known for playing Paul Kershaw in the iconic British Soap Coronation Street,
Tony has raced in the Silverstone Classic and is passionate about the world of automobiles. His Great Grandfather Frank

Morriss was a pioneer of British Steam Car's and played an active role in the London to Brighton run since the 30's. Tony
was passenger in David Stark’s vehicle, a 1904 Tourer Cadillac, which has taken part in the event over 25 times. The
vehicle suffered numerous technical problems and at one point nearly withdrew; Tony physically pushed it across the
finish line and was incredibly emotional with the whole experience. He is now the fourth generation of his family to have
completed the run.

Other personalities on the event include car enthusiast, Joy Rainey, who has taken part many times. This year's London to
Brighton Veteran Car Run acted as her warm-up and preparation for her 2,826-mile trip across the USA in her faithful
109-year old Oldsmobile in 2013.

Meanwhile, ultramarathon runner, Duncan Philips, ran from London to Brighton as part of a bet with fellow competitor
Dan Suskin from the USA in his 1902 Delahaye. Their wager, was for the last person to cross the finish line was to by
the ice creams. Dan was carrying a GPS device, with his co-ordinates being reported back to the event crew regularly. He
explained that the night before he drove the route and discreetly hid high energy supplies at ten of the locations. However
the majority of it had disappeared on the day, so he survived on just two coffees and Mars Bars. Both Duncan and Dan
arrived at the finish line at 12.36pm neck in neck, and then gentlemanly wanted to let each other cross first. Both Duncan
and Dan were presented with a finisher’s medals and ice creams.

Ben Cussons, Chairman of the Royal Automobile Club Motoring Committee, said: "Following the tremendous
excitement of the Queen's Diamond Jubilee and then the Olympics and Paralympics, the Royal Automobile Club was
pleased to round off 2012 with an equally spectacular world-class event in the Celebration of Motoring weekend – of
which the London to Brighton Veteran Car Run was the showpiece."

The Royal Automobile Club is grateful for the support of event title sponsors Bonhams and Tindle Newspapers. Sir Ray
Tindle, Chairman of Tindle Newspapers made it clear that his ongoing support for the Run is based on his love of his
favourite motoring event. Although this was Sir Ray’s 49th Brighton to London Veteran Car Run, his interest in the
event goes back to his childhood when, as a boy of seven, he watched the cars pass close to his Streatham home, and
dreamed of one day, taking part. In the summer of 1993 the then organisers of the Run sent out an appeal to the
participants: the ‘Brighton Run’ did not have a sponsor, and was in danger of suffering as a result. Sir Ray not only
responded with sponsorship in that and each of the subsequent 19 years. Sir Ray crossed the finishing line yesterday, and
celebrated with a tot of brandy to warm him up.

The Royal Automobile would also like to extend their appreciation to EFG International, RAC Motoring Services,
Hagerty, Abels, Regent Street Association, Motul, Kuoni, Dennis Publishing and the RAC for their continued
partnerships.

The original London to Brighton run was held on 14 November 1896 when 30 motoring pioneers celebrated the passing
into law of the Locomotives on the Highway Act, which raised the speed limit for 'light locomotives' from 4mph to
14mph and abolished the requirement for these vehicles to be preceded by a man on foot. The event was known as the
Emancipation Run. 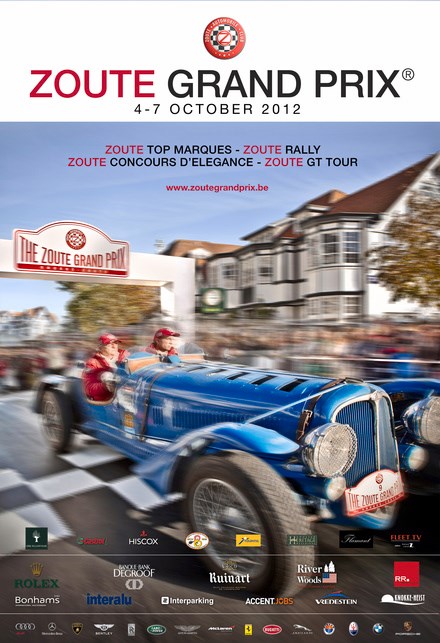