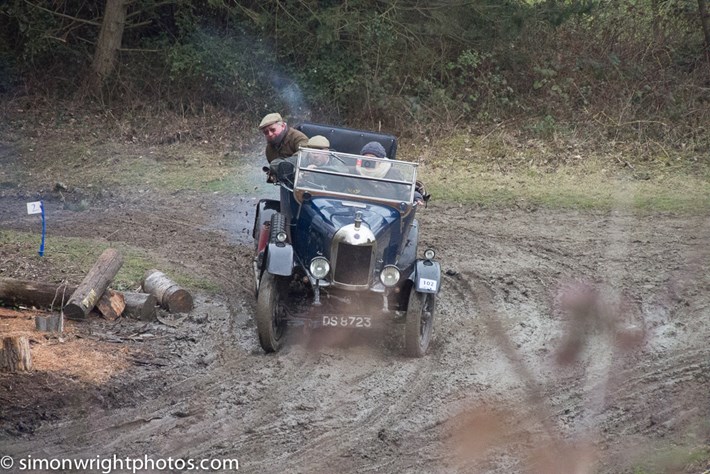 The Vintage Sports Car Club owners in the UK do not believe in putting their vintage cars in museums or just on static display, they believe in using and enjoying them in action. This is most evident in the members who take part in trials around the country. These events involve taking their vintage cars up muddy, steep hills and across narrow tracks in all kinds of weather, to see who can get to the highest point on a series of hills. The latest Trial took place in Herefordshire over the weekend, with at least 16 hills to attempt. The weather was overcast but generally dry as the 110 competitors took to the hills in a variety of Austin 7, Ford Model A and other assorted vintage cars. Most of the climbs were very muddy, with large puddles to hinder progress, and many hills caught out competitors, who could not reach the top. They are scored by how far they manage to progress. After the two days of competition it was David Golightly in a 1927 Ford Model T (117) who won the Herefordshire Trophy with a total score of 370, just beating Donald Skelton in a 1930 Austin 7 Sports who was 1st in his class with a score of 363. The Andrew Blakeney-Edwards Trophy was awarded to Miss Harriet Collings driving a 1925 Bentley 3/4 1/2 who was 1st in her class.