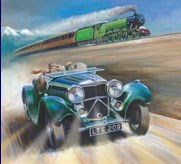 Following the great success of the first Flying Scotsman entries are now open for another chance at a special and unique challenge – driving a pre-war motor-car up the spine of Britain, taking the most scenic route along the remotest roads whilst enjoying the camaraderie and fellowship of like minded Vintage enthusiasts.

The Flying Scotsman is a time-trial, running against the clock, a heads-down affair lasting three days, a test of determination, stamina and endurance as well as reliability, while storming remote roads through glorious landscapes on the way to Edinburgh. The concept is totally unique – there is nothing quite like this, exclusively reserved for drivers of Vintageants.
The Route

No event starting from Brooklands, the home of British motor racing since 1907, would be complete without a ‘whizz’ up Test Hill. Built to test both the climbing and braking capabilities of the cars of that era. From the top there is the opportunity to drive along the last remaining section of the original banked circuit. This leads directly to the new Mercedes-Benz World test track where he first timed Test will take place.

Avoiding the notorious M25 the route heads through Surrey, Hampshire and Berkshire to reach Oxfordshire and to cross the River Thames at Henley, the venue for the famous Regatta. Running along the top of the Chiltern Hills the lunch stop is at the Buckinghamshire Railway Centre, one of the largest private railway collections.

The quiet back roads of Northamptonshire, Leicestershire, and even the little known County of Rutland, will see the first of the Time Trial sections as the route passes Castle Ashby and into Lincolnshire to the luxurious Belton Woods Hotel, near Grantham, for the first overnight halt.

The long straight roads of Lincolnshire enable rapid progress to be made towards the crossing of the Humber Estuary, over the longest single span suspension bridge in the World. In complete contrast are the winding roads through the rolling Yorkshire Wolds where there will be more Time Trial sections.

Up and over the North York Moors the route provides spectacular views and passes numerous ruined Castles and Abbeys nestling in deep valleys with fast flowing rivers and waterfalls. We stop for Lunch at Eden Camp in Malton which is an award winning Modern History Theme Museum. Sample the delights of Dambuster Stew and Dumplings or Churchill’s Pie, sufficient time has been built into the Lunch Schedule to visit the various WW11 exhibits. Coming down off the Moors there is a short run to the second overnight halt at the stunning Redworth Hall Hotel, near Darlington. Extra accommodation is also available at the nearby and equally interesting Walworth Castle Hotel.

The start of the third day will be from the National Railway Museum at Shildon followed by two short tests before heading west towards the North Pennines. The route, using all the best driving roads, then heads north into Teesdale and up and over the dramatic moorland landscapes to reach spectacular Langley Castle, near Hexham, for an early lunch halt.

There is still a long way to go to reach the finish in Edinburgh, however, the roads are fast flowing and traffic free as they wind their way through the forests of Kershope, Eskdalemuir and Craik. The views from the road past St Mary’s Loch are unforgettable, worth driving all this way to see. As the route leaves the Scottish Borders there are just the Pentland Hills to cross before arriving for a well deserved welcome at the Dalmahoy Country Club Hotel, on the outskirts of Edinburgh.

The event is not a Tour, however, for those with the slowest cars or who require a little more time alternative routes may be made available.
The Cars

The motor-car must be a model-type in production before January 1941. A few exceptions may meet the approval of The Selection Committee but only if the engine, chassis and general design criteria is proven to be of the era.

The entry-list is invitation only. Crews should note that this is a “press-on-regardless” style of motoring made up of three long days of essentially daylight driving, down remote country roads, with frequent timed sections, tests on private land and checkpoints, all manned by experienced local motor-club marshals. The Flying Scotsman is the only long distance purely for Vintageants and is aimed primarily at those with some experience who enjoy an element of competition.

The principal awards will be the Category and Class cups plus a range of other awards for Best Performances, such as the Best Marque Team. Every crew member reaching Edinburgh within the time schedule will receive a Finishers Award. To enhance the atmosphere of the whole event all crew members are requested to dress in period attire.