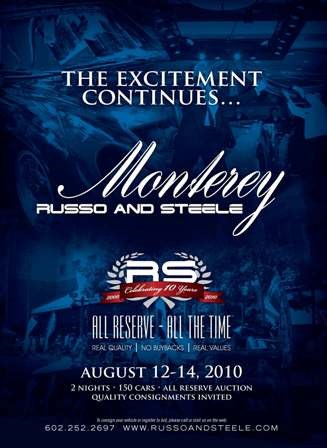 Monterey, CA (Jun 4, 2010) -- Celebrating its 10th Anniversary this August 12-14, 2010 in Monterey, California Russo and Steele is not only expanding to a three evening auction, but is also bringing some of the highest quality and most historic automobiles to the Monterey Peninsula. The Monterey auction event will present a range of the most luxurious and collectable European sports, American muscle, hot rods and custom automobiles suitable to satisfy any automotive desires. Located at the epicenter of historic, downtown Monterey, Russo and Steele at the Marriott hotel will provide every enthusiast a unique and memorable event.
Collectors look for the trinity when searching for that perfect new addition; originality, historic provenance, and quality. This particular automobile has all three. This 1969 Boss 302 Trans Am Race car driven by Parnelli Jones is only one of two left in existence and needs no introduction to the racing community. It was Factory Ford built by Kar Kraft, fully certified, documented, and registered by the "Historic Trans-Am Registry" and the FIA.

This automobile was the first Boss 302 powered Mustang to do battle; debuting at the Boss 302 competition at Daytona in February 1969 at the Citrus 250 NASCAR event with Bud Moore and driver Parnelli Jones. During the season it was driven by Jones and Follmer and was identified as #15 or #16 depending on the driver.

Only six 1969 Bud Moore/Ford Motor Co. "Team" cars were built and four of those six were either totaled or scrapped out at the end of the season. After the 1969 season, all of the remaining cars were upgraded to 1970 body and mechanical configurations.

http://www.youtube.com/watch?v=TzopfTzDAfw
Are you the organiser of this event? Contact us to manage and promote your event
« Previous // Next »
‹ › ×