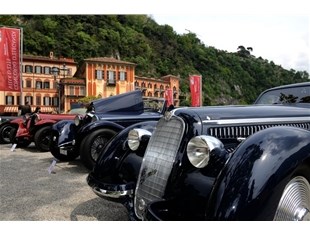 Sorry, we didn't receive an English translation
The Concorso d’Eleganza Villa d’Este is perhaps the most significant of all events celebrating the mystique of Historic Cars. It is undoubtedly the most traditional event which was held for the first time as early as 1929. Since its revival in the 1990s the Concorso has improved year by year in every one of the benchmakes for these; the beauty of the setting, the impeccable hospitality, the efficient organisation, the programme at the Grand Hotel Villa d’Este and Villa Erba, an enthusiastic audience, the public awareness in the international press and TV, and above all, the elegance, the originality and state of preservation of the precious automobiles participating in the event. At the Concorso d’Eleganza Villa d’Este visitors breathe an air of authentic aristocracy, rather than the slightly commercial atmosphere of other events.

The focus on design, originality, perfect preservation and the noble spirit bring together the most important and beautiful cars from all over the world year by year in Cernobbio – the true historical value of the automobile.

The grounds of the Grand Hotel Villa d’Este, one of the world's leading hotels, lapped by the waters of Lake Como, offers guests and visitors the chance to admire about 50 Historic Cars built between the twenties and the seventies, organized by different categories. An exclusive panel of judges led bypresident Lorenzo Ramaciotti judges for the Best of Show prize, the BMW Group Trophy. This is defined for an extraordinary automobile, which expresses beauty, passion and uniqueness. At Villa d’Este, the public is also a key element, rewarding participants with applause and their votes. In fact the most traditional prize of the Concours, the Coppa d’Oro, is decided by a public vote.

A prize awarded to the contemporary concept car was introduced in 2002. The prize has been a regular fixture of the Concorso d’Eleganza Villa d’Este since then and creats a link between the glorious past and the future of the automobile. The spectacular success of the Consorso has been largely made possible by the partnership of the BMW Group. This competition also goes back to roots of the Concorso when designers and car companies presented their newest automobiles to the public. About 10 to 12 Concept Cars & Prototypes are presented - some of them making their world debut during the days at Lake Como – to be elected by public vote.

The cars, the participants, the gardens and buildings of Villa d’Este and Villa Erba, the beautiful surroundings of Lake Como and the enthusiastic and knowledgeable audience make this event an unforgettable experience.
Are you the organiser of this event? Contact us to manage and promote your event
« Previous // Next »
‹ › ×