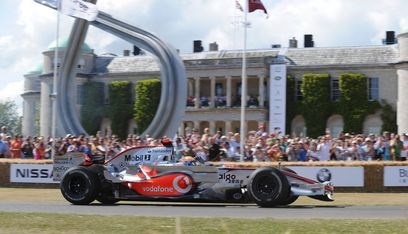 Sorry, we didn't receive an English translation
THE 2010 FESTIVAL OF SPEED THEME: ‘VIVA VELOCE! – THE PASSION FOR SPEED’

The Earl of March has now confirmed the theme of the 2010 Goodwood Festival of Speed – provisionally to be held on 2-4 July 2010 – as 'Viva Veloce! – The Passion for Speed'. This theme celebrates Italy’s all-consuming fascination with motor racing, and its global influence on the sport. From Alfa Romeo to MV Agusta, Ascari to Agostini, and Monza to the Mille Miglia, Italians have raced with breathtaking fervour, inspiring desire and devotion that transcends national identity.

Italian DNA runs through many of the sport’s most memorable and passionate performances. Whether it’s Fangio and Wimille dominating the immediate post-war years in Alfa Romeos, Moss and Behra battling against the oddsin Maseratis, Villeneuve and Schumacher’s towering achievements in Ferraris, Toivonen and Kankkunen blasting through the forests in Lancias, or Surtees and Hailwood sweeping all before them on MV Agustas, competitors from many nations have shared in Italy’s glory.

Equally, many legendary Italian motor sport heroes took on their countrymen in non-Italian machinery, such as Nuvolari and Varzi in German Silver Arrows, Agostini and Rossi rising to new heights on Yamahas, Mercedes-Benz conquering the Mille Miglia, and Porsche making the Targa Florio its own. The 2010 Festival of Speed will honour the cars, motorcycles, drivers and riders that raced with unbridled Latin zeal, and the legendary feats they achieved, with a particular emphasis on the centenary of one of Italy’s most celebrated marques – Alfa Romeo.

Running alongside the 2010 Festival central theme, Goodwood will also celebrate 60 years of the Formula One World Championship, with a gathering of cars and drivers that have shaped the history of motor sport’s most glamorous series. The 60th anniversary of the epic Carrera Panamericana road race, and 50 years since the RAC Rally took to the forests for the first time, will both be marked in true Goodwood style too.

Also in action for 2010 will be a dazzling array of cars and motorcycles from a huge variety of disciplines, enhancing the Festival’s reputation for showcasing not only the world’s most famous stars, but also its lesser known gems. Tackling the famous 1.16 mile Goodwood hillclimb on two-wheels and four will be everything from early Grand Prix and endurance machines, to off-road and contemporary racers.

Complementing the overall Festival of Speed theme will be a host of other attractions at the world’s greatest celebration of motoring. Aside from getting close to the action-packed hillclimb and paddocks, Festival-goers will be able to relish some of the most stylish vehicles ever designed at the Cartier ‘Style et Luxe’ concours d’elegance, glimpse into the future of personal transportation at the BP Ultimate FoS-TECH technology pavilion, see many of motor sport’s famous faces up close, swoon at the mouth-watering display of supercars in the world’s finest moving motor show, witness the exciting sideways action on the Forest Rally Stage and become a part of the action at the off-road activity fields and Junior Festival of Speed.

Goodwood Festival of Speed founder, Lord March says: ‘It will be fabulous to have so many great cars and drivers here at Goodwood to celebrate our Italian-flavoured Viva Veloce! theme for 2010. I look forward with much anticipation to seeing some of the greatest drivers, riders and machines in action.’

The provisional date for next year’s Festival of Speed is 2-4 July 2010.

To order advance tickets for the 2010 Festival, please contact the Ticket Hotline:

Book online at: http://www.goodwood.com
Are you the organiser of this event? Contact us to manage and promote your event
« Previous // Next »
‹ › ×