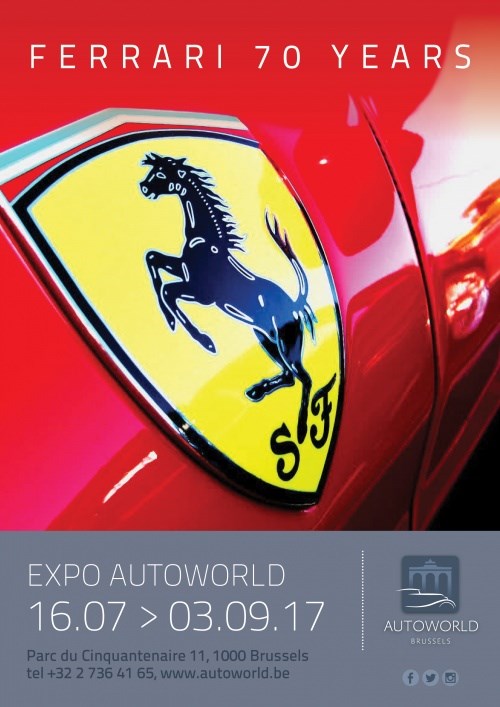 Autoworld has chosen to dedicate its summer exposition to Ferrari's seventieth birthday! Over 45 mythical sports and luxury cars will tell the story of the scaffolding horse on the Mezzanine, on the first floor of the museum. The 49-year-old Enzo Ferrari was on the cradle of the brand. Within a few years Ferrari became a myth. After the United States, Belgium was the largest importer, thanks to the passion of one of Ferrari's pilots, Jacques Swaters. Hereafter some cars likely to be exhibited: For the classics: the 166MM, the 206GT Dino, the 250 Pininfarina, the 275 GTB, the 275GTS, owned by Rachel Welsh, the 275 LM, the 365GTB Daytona, the 500th Superfast, the 512BB ...The youngtimers: the Testarossa, the F40, the 288 GTO, the 550 Maranello WSR (World Speed ​​Record), l'Enzo (owned by Jean Todt, ... The modern cars: the Ferrari Aperta, the 599GTO, the F430 Scuderia Het offer of competitor cars: the 156 F1, the F1 / 87 (ex Gerard Berger) and the 275GTB Competition ... and of course others you can discover during the exhibition. 70 years ago ... The story begins in 1947 in Modena, Italy where the first 125S left the door on Via Abetone Inferiore. This sport model immediately won the race in Piacenza, the first of a long series of wins. (Read more at www.autoworld.be)