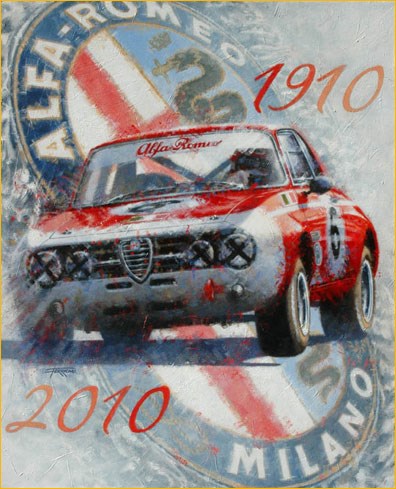 Sorry, we didn't receive an English translation
Auto Retro Barcelona 2010, the 27th edition of
Spain’s number one vintage car and motorcycle
show, to be held from 4 to 8 December 2010, is
already underway. Even though there are still al-
most nine months to go, event organisers Promobil
Group have already started promoting a show full
of exhibits and activities that promise to surpass
previous editions.
Alfa Romeo & Juan Carlos Ferrigno
To start with, Auto Retro Barcelona will be ce-
lebrating the centenary of a historic brand, Alfa
Romeo, with a magnificent retrospective exhibi-
tion organised by the Club Alfa Romeo Catalunya,
which will include the manufacturer’s most im-
portant and emblematic 20th century models.
Closely linked to this event, Barcelona-based
Argentinean artist Juan Carlos Ferrigno has
agreed to design the Auto Retro Barcelona 2010
official poster, choosing as his central theme an
Alfa Romeo classic – a GTAm competition car
surrounded by the Alfa Romeo logo, one of the
most famous sights in the automotive world.
Ferrigno’s collaboration was made possible by
the generosity of Planners International Event,
for whom the artist works on an exclusive ba-
sis.
International scope, activities, quality...
After celebrating its 25th anniversary in 2008,
Auto Retro Barcelona last year passed a mi-
lestone appropriate to its coming of age: internationa-
lisation, in the form of an exhibition staged by the auctioneers Bonhams during last year’s show. Promobil Group
continues to collaborate with Bonhams to hold similar exhibitions in future shows. In any event, internationali-
sation will from now on be a hallmark of Auto Retro.