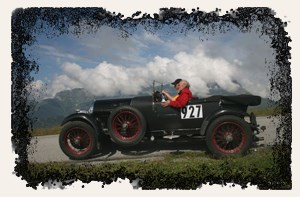 With the help of John Davenport and Robert Rorife, we have designed an event that is a romance for lovers of beautiful alpine scenery, while at the same time retaining the rally’s sense of sporting adventure. The result ? Daily stages of less than 300 km adorned by the usual RT (regularity sections) for those who desire the cherished Coupes des Alpes. But if you are planning to participate in the rally as a family, the route is also conducive to shortcuts that will allow your wives to enjoy for longer the magnificent hotels that we are using. Each one of you can thus create his own Rallye des Alpes. Also worthy of note is the fact that 2010 is a very special year as it celebrates the 100th anniversary of the first “Alpenfahrt”, generally recognized as the ancestor of the Rallye des Alpes.

Image de la voiture 1 Above all what makes this rally unique is the friendliness that prevails especially once we come under the care of our hotelier friends each evening. And of course, we shall have vans to transport your luggage and, travelling round under the watchful eye of Walter Kammermann to help you wherever they can, the best teams of engineers specializing in vintage cars.

Day 1: Geneva – Interlaken, 270km:
After the technical and administrative checks that are carried out on Sunday, the route heads to Interlaken via the welcoming Haute-Savoie and its gentle cols. Then you enter Switzerland via the Pas de Morgins and this will start the serious stuff. After Villars and the Col de la Croix, you will cross the Jaunpass after which the Bernese Oberland with its magnificent floral-decked houses will line the way that leads to Interlaken at the foot of the famous Mönch, Eiger and Jungfrau mountains

Day 2 : Interlaken – Baveno/Lake Maggiore, 290km:
Ah, this second stage is a real treat ! It starts by the turquoise banks of the Lake of Brienz where the last cuckoo-clock factory operates and then takes you over the famous cols that all exceed 2,000 metres : Grimsel, Furka, Saint-Gotthard and Nufenen. Here it would be a shame to use the modern roads instead of passing as we will the permanent snowlines of the summits thus capturing unforgettable memories before descending to the shores of Lake Maggiore and the palm trees of the Hotel Dino in Baveno.

Day 3 : Baveno – Lucerne, 280km:
The day starts with the picturesque crossing of Lake Maggiore by the ferry between Verbania and Laveno. By-passing the city of Locarno, a venue famous for the signing of the Locarno Treaties of October 1925 and now for its film festival, you will head in the direction of Les Grisons and, after the tortuous ascent of the Lucomagno Pass the route will cross Disentis and quickly come over the Oberalp Pass to Andermatt. The subsequent descent into the valley in which lies the oldest towns in Switzerland brings a new enchantment. As you enter Wassen, look to see the Saint Gotthard railway line, first opened in 1882 and which turns here through three loops around the church in order to gain altitude. In the bottom of the valley, you will come to the home of William Tell and the Axenstrasse that winds along the eastern side of the Lake of the Four Cantons. Much used in the past for travellers heading to Italy, it is now transformed into a veritable garden. Our arrival to the Palace Hotel in Lucerne avoids the worst of the traffic and should be early enough for you to take a stroll into the magnificent old city of Lucerne that is only a short walk away.

Day 4 : Lucerne – Seefeld, 300km :
This morning you will take the valley road towards Schwyz and then on twisty mountain roads over the Ibergeregg and Sattelegg. Next is the immaculate city of Appenzell, known far and wide for its famous cheese as well as for its public meetings (Landsgemeinde) that date from 1378 at which voting takes places on major issues. Our major issue in Appenzell will be lunch ! In the afternoon, the route enters Austria and uses some small and very picturesque roads known only to Robert Rorife. At the end of the day, you can be sure that the magnificent Hotel Klosterbraü will have reserved its traditional welcome for us (and our cars) in the middle of the village. Image de la voiture 1

Day 5 : Seefeld – St Moritz, 290km :
Our last day in the mountains plays ducks-and-drakes with the borders of three countries. After the laughing valleys of the Tyrol, we go back into Switzerland (Les Grisons) for an instant before diving into Italy to renew our acquaintance with the Stelvio, not just a geographic high point of this 52nd Rally des Alpes but also our location for lunch. The afternoon section is relatively short and brings us via the Bernina Pass and Pontresina to St Moritz and the truly gorgeous Suvretta House and Resort. Here one can take a well-merited rest before the gala dinner and the prize giving.
Bent u de organisator van dit evenement? Klik hier om uw evenement te beheren en te promoten
« Vorige // Volgende »
‹ › ×